Since its inception in June 2009, the Scottish Coastal Rowing Project has caught the imagination and enthusiasm of a large number of groups and individuals around Scotland and further afield.

From North Berwick to Stornoway, there are now many communities and organisations either already building boats or raising funds to join this renaissance in community boat building and rowing around Scotland’s coast and on her lochs.

Crail initially raised over £2000 towards the cost of our own boat, and a basic kit was bought from Jordan Boats in Leven. Donations and pledges to date have been made by prominent Crail personalities, the hard work of David Jerdan and his rowing marathon, support from the Crail Community Trust and Fife Council Locality Fund.

An interim committee for the new club was established – with Dave Jerdan as Convener, Chris walker as Secretary, Peter Salkeld as Treasurer and Bernie McConnell as a co-opted member. Jimmy Aird agreed to be the club’s first President.

The Start of Our Exciting Project

It doesn’t look much but within months these sheets of marine ply (plus a few more bits and lots of  labour) will become our very own coastal skiff – ready to launch. Jimmy Aird found us premises in Nethergate where we started to build the boat.
A need for new premises arose when the short term lease on the garage in Nethergate came to an end.
We needed a space, with electricity, about 30ft x 20ft in or around Crail into which we could move the boat as soon as possible so that work can continue....and Bernie came to our rescue!
A small but intrepid band of Crabbers picked up their sledgehammers and shovels to prepare Bernie’s garage to receive the skiff.
This was to be its new “construction phase” home from Tuesday 6th September. 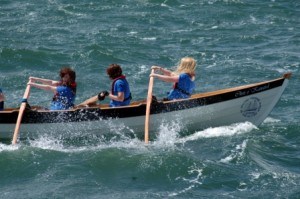 Anstruther Rowing Club have asked if any of our club would like a shot at rowing one of their skiffs next Saturday the 24th Sept from about 11am onwards.  The weather is looking a bit windy but they reckon that inside the harbour it should be OK.  Anyone interested should contact David Jerdan asap so that he can make the arrangements. I’d be grateful for any photos if you manage to get along. 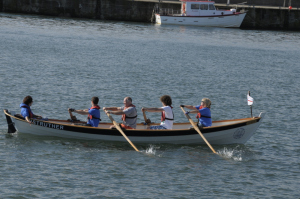 We had a great time on Saturday.  Ben Grieve & his son Jake, Ian MIlls & his son Jack and me.  We all had 2 or 3 rows, initially in the harbour and then in the open sea, with Anstruther members coxing and participating as well.  The weather was fine and the sea (relatively!) calm.  We have the making of a great rowing team as all are already ‘au fait’ with what is required.

They have a great facility there as the skiff is kept in the shed at the Maritime Museum, with easy access to the water.

The season is almost at an end but it has given us fresh impetus.

The keel is progressing and work in Bernie’s garage is now on a 2/3 times a week basi
Keel Laying this evening Posted: November 22, 201
Good progress is being made with the skiff with the last of the planks making up the frame being glued and screwed into place at a work session last Tuesday evening.
The keel is now being shaped and the whole thing is now taking shape really well.  At last we can see the makings of a boat.
A big thankyou to the building team
Great progress being made on the skiff which is beginning to take shape.
The Boat Has a Name! Posted: March 28, 2012
A coffee morning held on the 17th March raised the brilliant amount of £272.35.  Thanks to everyone who helped out or attended.
The boat was on display outside the Legion Hall and many people entered the competition to name the boat.
The winner is “Crail Partan” and the successful winner will have the honour of performing the naming ceremony when the boat is finished.  The names of those submitting the suggested boat names were kept secret from the judging panel to avoid favouritism but David Jerdan is “marginally embarrassed” that it was his own nomination that was eventually declared the winner.
Anyway, “Crail Partan” is now nearing completion and should be on the water shortly – just one more push to get us to bring the build stage of our project to conclusion.
Just a reminder to finish… please let Peter have your 2012 subscription if you haven’t done so yet. 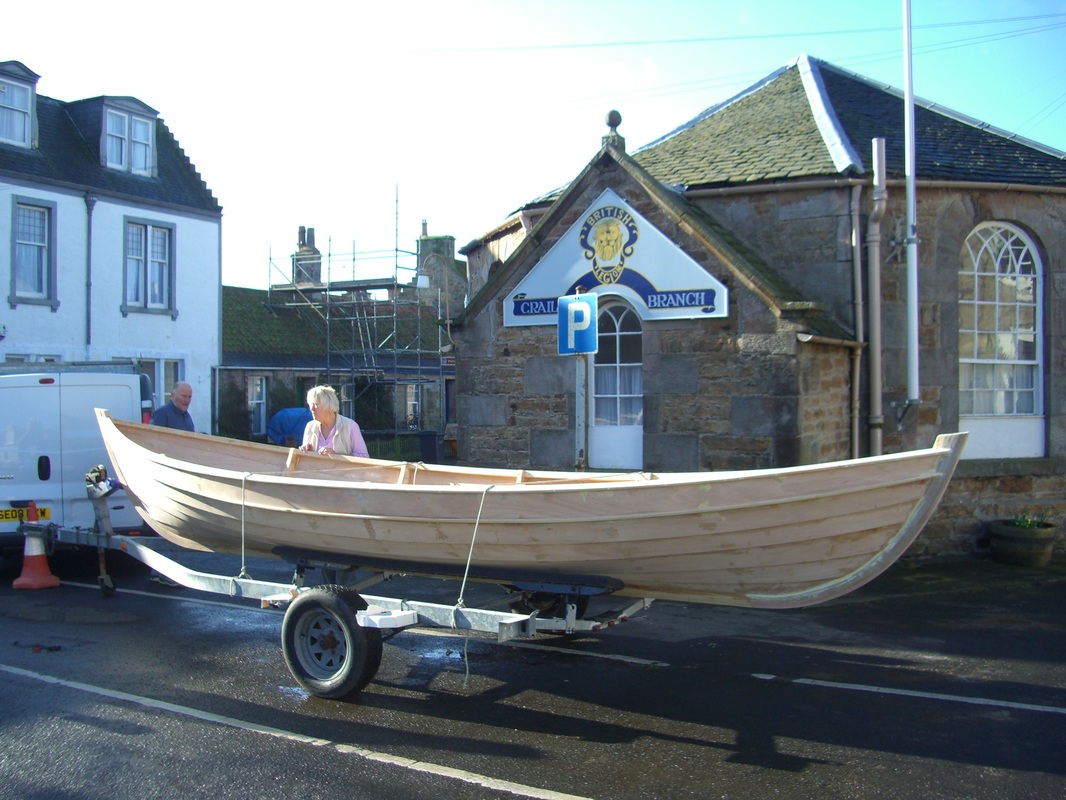 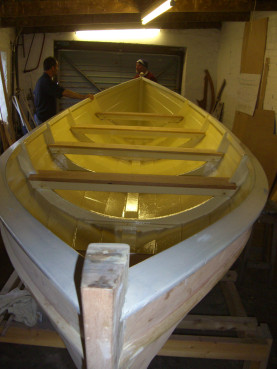 Thanks to a super stint from Stewart Mackay and his boys, the intricate final bits of joinery work have been completed. The regular workers have been hard at it, and the boat has been painted inside, was turned over last night and the outside will be finished within the next 2 weeks. We intend to have some discrete trials before the official launch. A date for that will be announced soon when it will be officially named ‘Crail Partan.’
Fundraising has gone well and we have now paid for all the materials except for the last few pots of paint and still have £300 in the kitty! Further donations are always welcome as we will have some ancillary items to pay for. In this connection we are taking a stall at the harbour as part of Crail Food Festival on Sunday 17th June. Please let me know if you are available to help on that day.

Now that work is almost complete, we also need to look at our competitive programme.

We are entered for Anstruther Regatta on Monday 4th June (public holiday) and Portsoy on 23/24th June.
We are also looking at either Dunbar on Saturday 25th August or North Berwick on 1st/2nd September.
Looking further ahead the World Skiff Championships will be in Ullapool from 8 – 14 July 2013.Most musters have various age group competitions for male/female and mixed competition over varying distances.
The emphasis is on having fun and we will be organising practice sessions at Anstruther. We are also looking for a couple of ‘lightweight’ people to get some training on coxing the skiff! 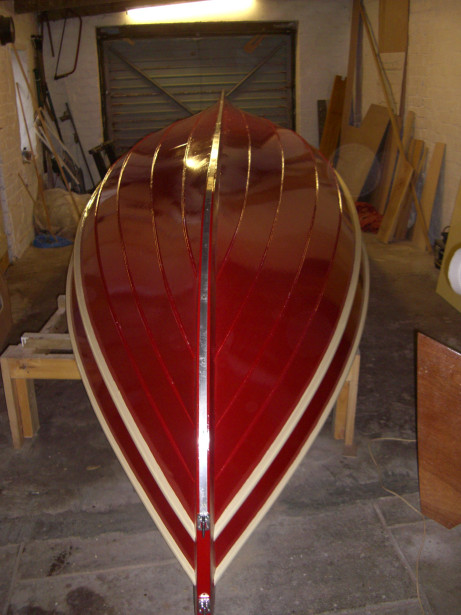 The boat is looking really great as you can see from the photo.

Outside painting is now complete.

We are meeting at 9am on Sunday 13th to continue with the final push. All welcome and bacon sarnies are on offer as an incentive!

Under a blazing sun, Saturday 26th May saw the official launch and naming ceremony of “The Crabbers” boat.  It’s been a brilliant achievement and big thanks must go to the core team of builders – Stuart McKay, Ian Mills, Ben Grieve, Glen Rickman, Bernie MacConnell and David Jerdan.

Here are some more pictures of the build:

Over the last few weeks “The Crabbers” have begun to take part in local regattas.

Although their first outing at the Portobello Regatta on the 28th July was, to quote David Jerdan “a steep learning curve” our rowers did really well at the Lifeboat Gala Day on Sunday 5th August in a three club competition between Anstruther, Pittenweem and ourselves.

Well done Team Crail - a great afternoon and a worthy haul of a bronze, 2 silvers and a gold.

The detailed results were:

Some photos from the two meets…..